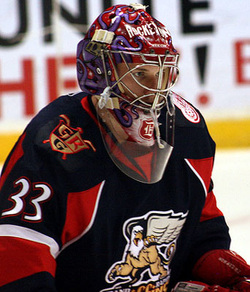 Beginning with the 2005-06 season, Jimmy Howard began his career in the AHL with the Grand Rapids Griffins where he was occasionally called up to play for the Detroit Red Wings of the National Hockey League. Howard's inaugural season in the AHL became what is still one of his best in professional ice hockey. During this season he set many personal records as well as franchise records, including being the first Griffin named to the AHL's All-Rookie Team and helping establish the Griffins franchise win streak record of 12.

Howard only played four games in the 2007-08 regular season and therefore did not qualify to have his name engraved on the cup. However, he was included in the 2008 Detroit Red Wings Stanley Cup picture, given the Cup for a day, and awarded a Stanley Cup ring by the Red Wings' management. With the retirement of Red Wings goaltender Dominik Hasek in June 2008, Howard was expected to compete with Ty Conklin for the position beside Chris Osgood for the 2008-09 NHL season, despite Conklin's noticeable advantages in terms of experience and contract. Although Howard did not earn a permanent spot on the Red Wing's roster for the 2008-09 season, he was expected to make the roster in the near future.